My friends and I have been discussing this for a long time and we think that they are. But then, some of my family especially my big sister is a little skeptical.

My mum, is the best…she believes in Unicorns too! So we decided to investigate to find out the truth!

We discovered they are described as a mythical creature, a beautiful horse with a single horn. Typically, it was a white horse with cloven hooves. These are hooves like what a deer or cows have. Unicorns are also part of mythological stories both in eastern and western culture and there is quite a bit written about these beautiful creatures.

What set’s unicorns apart is their spiral horn and I am sure you would have seen these in images and pictures or, even on your friend’s birthday cake as a topper like this one on my Birthday cake when I was 5! 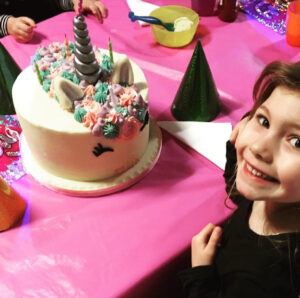 Unicorns in Other Cultures

While researching for images for Unicorns, we found these creatures over the centuries in different cultures, all resembling a unicorn (not quite as cute tho)! Check these out:

Description: A mythological one-horned beast with dragon type features. They are creatures which punish evil doers. Qilin is beloved to be a symbol of good fortune and prosperity.

Description:This unicorn-like creature was not very friendly in the animal kingdom and was actually feared.

Description: It is the King of animals and lives on The Holy Mountain.

The idea that unicorns exist was first established around 5th AD (about 15 decades ago). A Greek historian, Ctesias wrote about a unicorn describing it as a beast with an enviable multi-colored horn, blue eyes, and a white body.

Generally, during the early civilization, unicorns were also like seals and by other authors who reﬂected similar characteristics in their writings. The idea took hold and people became interested in ﬁnding more about umicorns. Originally, unicorns didn’t look anything like what we have now. Some cultures thought unicorns to be a white goat with a single horn protruding from the head while others though it looked more like a rhinoceros!

They were said to be pure and symbolized peace and prosperity. Due to this quality, it was believed that only a girl could capture them. Unicorns were also said to walk gracefully and elegantly, the exact qualities of a real lady were expected to possess.

It was believed that if you managed to steal their horns, you could not only use it to heal diseases but also ﬂy!

Unicorns in the bible

The Bible makes nine references about unicorns in its texts. But, you can only ﬁnd them in the authorized King James Version of the Bible, since other versions have replaced the word unicorn with other names mainly attributed to translation errors. The Bible was originally in Hebrew and has since been translated to so many other languages, in the process, accurate translation has been a major challenge.

As years went by, artists came up with drawings portraying unicorns as beautiful horses with single horns protruding out of their heads. The theory that they could ﬂy was not considered until the 1970s when drawings and posters of winged unicorns came up. The illustrations were visual and did not include any wording; hence the involved artists did not explain what kind of creatures these were. People ended up concluding they were unicorns due to similar features; and just like that, with no proof to support the theory, other artists ran with the idea and it has stuck ever since.

Unicorns have unique magical gifts. If a unicorn sheds tears or blood, it is meant to heal. However, they are so mystical, it is hard to catch them. Whenever we go to the woods or forest reserves in summer, my friends and I are always on the lookout for these creatures. One day, we are going to see one, and when we do, we will be the first ones to post them here!

Well…People Have Seen Them for Real!

There is an Austrian man Antal Festetics who has recorded a unicorn. Okay, so if that sounds crazy, then, how about the claims made by an organization such as The Ontario Science Center! They saw a unicorn in the Don Valley. Now, you may think that this sounds fake but in 2016, scientists discovered fossilized bones of a one-horned animal in Kazakhstan. It is known as the Siberian unicorn. What is so exciting about this discovery is that as early as thirty thousand years ago, they roamed Siberia with humans!

But, what about some ancient explorers of the past? Julius Caesar, Alexander the Great, Ctesias, a Greek historian and even Confucius also claim to have seen a unicorn. Surely, these are very respected people, they would not lie or were their eyes playing tricks on them?

They must have asked themselves the same question, are unicorns real?

I love my friends 2 of these are presents 🎁 I l

Me and my mum completed the @peaceful_babes traini

Wow cool for crafts must get some from @planet_jun

It important to take care of our #kidsmentalhealth

Get your #backtoschool #unicornpencilcase at my sh

Here is some lovely #unicornart I did on @canva to

So wanted this from @monsoon but they only do it f

What makes you laugh? 🤣 I love #unicornpoop #un

See my latest blog about journaling for #kidsmindf

Check out my new timers on @youtube #kidstimer #ho

Sign up to Unicorn Ellie for lots of FREE activity downloads!